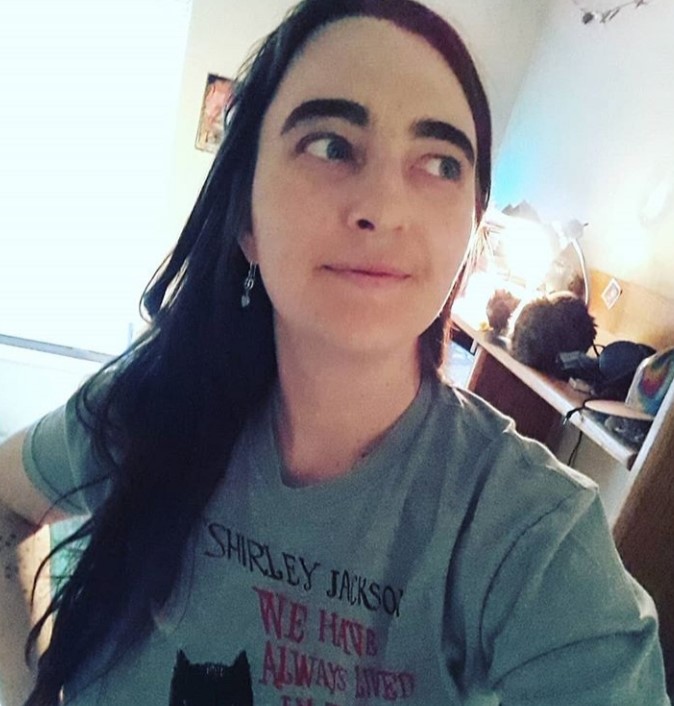 Meet the editor: Sara Century on the power of speculative fiction

As we’re gearing up to bring you Issue #2 of Decoded Pride, we wanted to sit down with the editors of this issue to find out what they love to read, why speculative fiction matters to them, and what their wildest dreams are for the future of Decoded Pride!

In this edition, we’re talking to the inimitable Sara Century, writer, critic, editor, podcaster, filmmaker, and all-around nerd. Sara talks to us about her love of unsettling horror and how dreaming of better and worse worlds helps us live with the one we have.

And, don’t forget you can pre-order your subscription to Issue #2 now or get your full-color PDF version of Decoded Pride Issue #1 (and eBook reader copies as well!) at the Queer Spec Store!

What are your favorite kinds of stories to read?

I like sad, scary, unsettling stuff. I’ve always read a mix of history books, horror, and a smattering of other things. Until I was around 25, I read all classics because I felt like it was important to get those under my belt, but since I started choosing my own reading material it’s basically just been, what’s going to haunt me the most? Also, can it be gay in addition to that. Also, superhero comics. I read so many superhero comics! They’ve been in rotation since I was a kid and they continue to monopolize so much of my reading time.

I like that it’s a metaphor for other things, and I appreciate the way it engages your imagination and asks you to stretch your empathy. Sometimes I see people use fiction as kind of a morality guide and they’ll hate on something just because it didn’t wrap things up neatly for them, but to me the point of speculative fiction is to give us the space to have these exercises in understanding and acceptance.

Joan Didion’s famous quote about how “we tell ourselves stories in order to live” definitely applies. In addition to that, a friend of mine once said, “without stories, life would be meaningless,” and I think those things are true. It’s just as important to queer people to be able to use metaphor and symbology to express our conflicting emotions and ideas as it is for anyone else. We need to be able to dream of better worlds, and of worse worlds, in order to understand the world as it is.

What was the first queer speculative story you read that blew you away? Why did it move you so?

This is a weird deep cut but I remember when I was very young my extended family knew I was a nerd and would sometimes get me those Year’s Best Fantasy & Horror collections for Christmas. Which, looking back, is hilarious because they included some definite adult subject matter that nobody was checking before they handed it over to me. I remember getting the sixth edition when I was maybe ten years old, and there is a short story called Calcutta, Lord of Nerves by Poppy Z. Brite that was very queer, but the one that sticks out the most to me is a poem by a relatively obscure writer named Jessica Amanda Salmonson. Most of her stuff is out of print which is a shame. The title was “Through The Looking Glass, Life Is Death,” and it was about duality and Alice in Wonderland and maybe some other stuff I don’t remember. I don’t know if that was an explicitly queer work, but it seriously stuck with me. I loved that it was observing a flawed female character with this sort of loving and forgiving gaze, which, at the time, was pretty rare in the speculative fiction I had access to.

What’s your favorite part of working on Decoded Pride?

Definitely reading everybody’s stories. Even the ones we can’t accept. I just love seeing what’s out there and having my mind blown. There’s never been a story I regretted reading.

What are your wildest dreams for the future of Decoded Pride?

Decoded Pride even existing is already such a dream come true that it’s hard to think of where I would even go from here. Maybe a print edition that collects the Best Of in five years?