We announced our official roster of authors last week and we’re amped to share our official schedule today! These are 30 original queer genre stories by 30 LGBTQ+ creators–all independently operated and funded, so join us by buying a subscription today!

A screen-reader friendly version of the Decoded schedule can be downloaded here: Download

June 11 │ The Princess and Her Knight by Sarena Tien

June 18 │ The Incident at Mr. Hungry’s by S.E. Fleenor

June 19 │ Nothing in the Dark by C.M. Fields

June 27 │ What Lies Between Oceans by Sigrid Marianne Gayangos

If you haven’t already, you can buy a subscription to Decoded below: 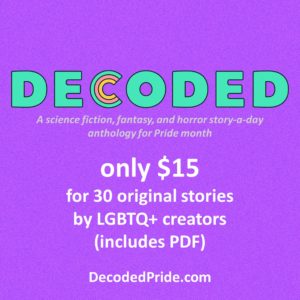